It’s confirmed. Liverpool’s efficiency in front of goal has got worse. They’re all the way down in 10th place in terms of shot conversion rate in the Premier League this season.

The reigning champions drew a blank in their 1-0 defeat by Chelsea on Thursday night as they fell to their fifth successive defeat at Anfield for the first time in the club’s history.

Following Mason Mount’s first-half strike the Reds were in need of a goal in the second period to arrest their slump at home. 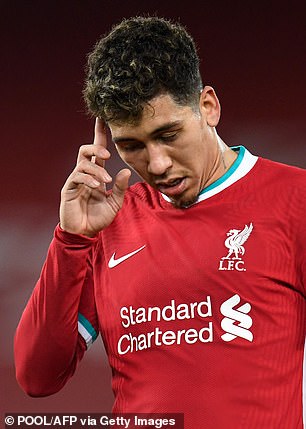 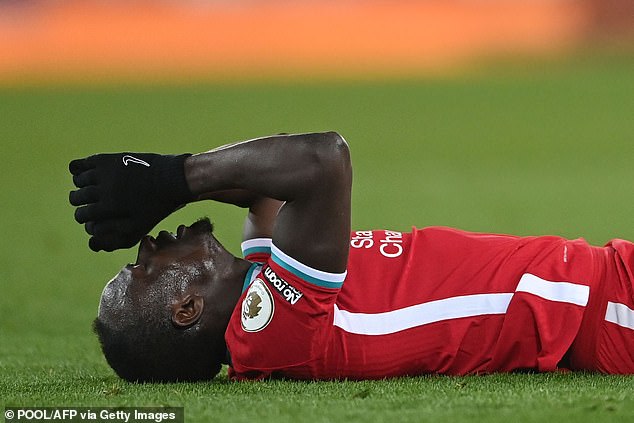 With around half an hour left on the clock, Jurgen Klopp replaced the league’s top scorer Mohamed Salah as his side went in search of an equaliser.

But not for the first time this season Liverpool failed to create many meaningful chances throughout with their night summed up by Sadio Mane striking the air instead of the ball when a pass was played over the top.

Former Liverpool defender Jamie Carragher claimed his old club ‘don’t look like scoring’, emphasising that although they have injury issues in defence it is the attack that is misfiring.

‘They’ve lost goals, they don’t look like scoring. Even with 20 minutes to go you don’t feel Liverpool are going to score a goal,’ he told Sky Sports.

‘It felt like it would need to be a big Chelsea mistake. You’re not quite sure where the goals are going to come from.

‘I couldn’t believe Salah came off, to take your top scorer off was a strange one. Klopp’s never been shy in taking him off, he certainly wasn’t at his best today, but it wasn’t a game where he can lose possession. 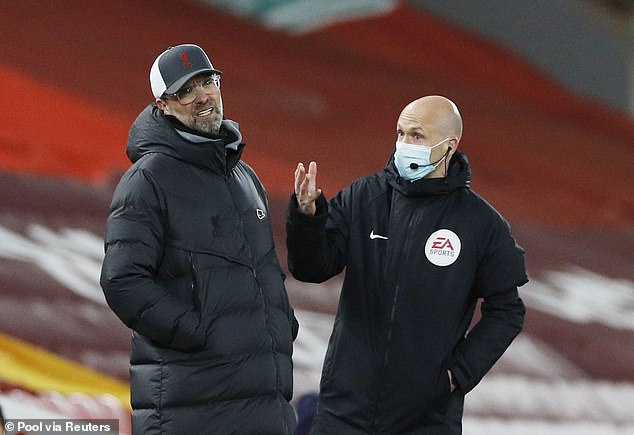 Liverpool to finish outside the top four 8/11

‘He’s not a great player with the ball, he’s better at running off the ball and scoring goals. I don’t know if there was something about Sunday sharpness, or the games he’s played. It’s difficult to question Klopp, but I thought it was a strange one.

‘When you need a goal you leave as many people on the pitch who can get you a goal. If Salah can get three points at the weekend maybe Klopp will be proven right.

‘But they need to do something big in the transfer market to score goals.’

Liverpool, who have been nothing short of sensational in previous seasons under Klopp, are among the top shooters in the top flight but they are lagging behind their rivals when it comes to converting those shots into goals.

The Reds are ranked second, behind only league leaders Manchester City, for shots on goal this season.

In the 2018-19 campaign, when they were pipped to the title by City by one point, Liverpool were averaging 15.1 shots per game and last term, when they ran away with the domestic crown, they averaged 15.6 shots a game.

While Merseyside rivals Everton, who leapfrogged Liverpool into fifth courtesy of a win at West Brom in midweek and are mounting a serious challenge for the final Champions League spots, average just 9.7 shots per game – the fifth worst return in the division. 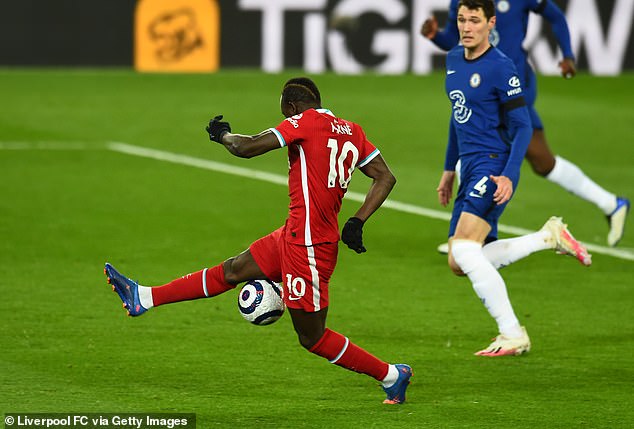 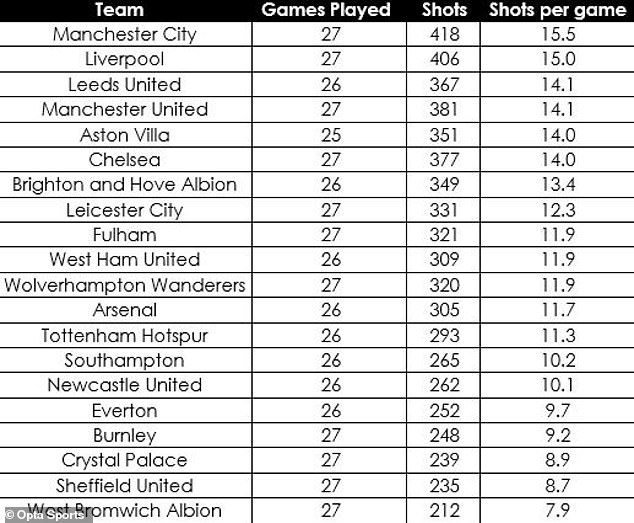 The Reds are ranked second, behind only league leaders Manchester City, for shots on goal 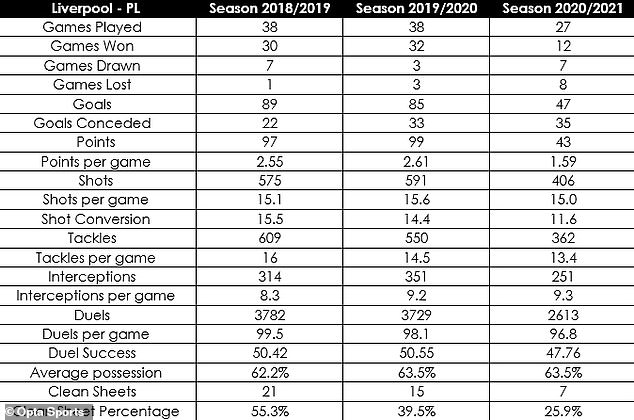 However Liverpool’s shot conversion rate is significantly worse than the majority of their top four rivals and, in fact, the 10th worst in the top flight, at 11.6 per cent.

Liverpool have scored just 47 goals from 406 attempts, highlighting their bluntness in attack.

Only Chelsea have a worse return than Liverpool out of the sides in the top eight. Everton lead the way at 15.5 per cent, notching 39 goals from 252 shots, with Tottenham the second sharpest with a shot conversion rate of 14.3 per cent.

United and Leicester are joint-third on 13.9 per cent while Pep Guardiola’s side are fifth with a rate of 13.4 per cent – scoring 56 of their 418 efforts on goal. 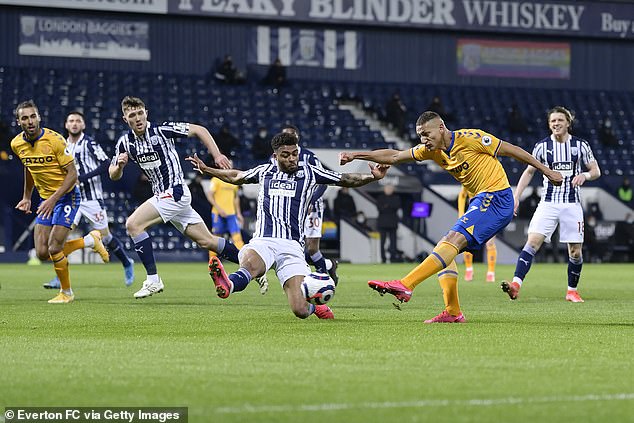 Their bitter rivals Everton lead the way at 15.5 per cent, notching 39 goals from 252 shots

West Ham, who are enjoying a fantastic season under David Moyes, are ranked sixth overall with 12.9 per cent while Crystal Palace, Leeds and Southampton are all performing better than Liverpool when it comes to putting the ball into the back of the net.

Palace, sitting 13th in the league table, have a shot conversion rate of 12.1 per cent, while 11th-placed Leeds and Southampton in 14th, but without a win in nine games, both have rates of 11.7 per cent.

Arsenal are one place behind the reigning champions after converting 34 of their 305 attempts, equating to a rate of 11.2 per cent and Chelsea are down in 12th place with a rate of 11.1 per cent. 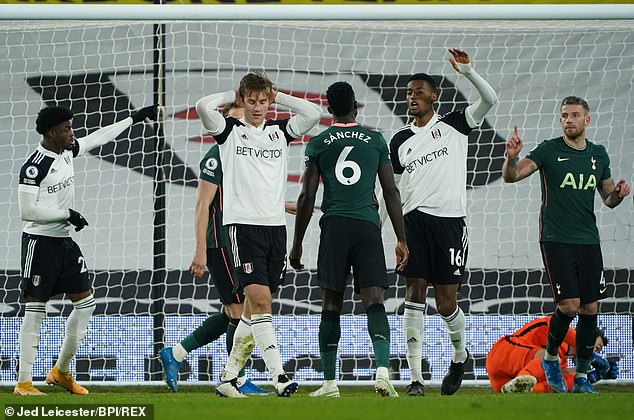 Fulham are the most wasteful, with a shot conversion rate of 6.8 per cent, and face Reds next

Aston Villa and Newcastle are ranked 13th and 14th respectively in the shot conversion rate standings with West Brom, Wolves, Burnley, Brighton, Sheffield United and Fulham all recording rates lower than 10 per cent.

Brighton, who are three points above the dreaded relegation zone, find themselves in the bottom three when it comes to tucking the ball away. They’ve scored 26 goals from 349 efforts.

Basement boys Sheffield United have notched just 16 goals from 235 shots, a conversion rate of 6.8 per cent but it is Fulham who are the most wasteful, converting just 6.5 per cent of their efforts on goal.

Fulham are the visitors to Anfield this weekend where goals could be in short supply on both sides. 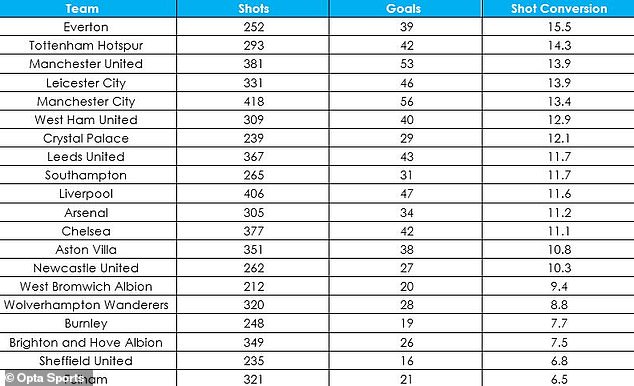 Robert Lewandowski flies to Dubai – deemed a ‘risk area’ in...