By Harry Slavin For Mailonline

Timothy Fosu-Mensah has endured a tough start to life at Bayer Leverkusen after the defender suffered a season-ending knee injury on Sunday.

The 23-year-old was forced off before half-time during the Bundesliga side’s defeat by Freiburg on Sunday and the club confirmed he had torn his ACL on Monday afternoon.

The Dutch international was making just his sixth league appearance since completing his £1.8m move from Manchester United in January.

However, he is now set for a spell on the sidelines, and Bayer confirmed the player is now facing an operation.

Releasing a statement on their Twitter on Monday, Leverkusen wrote: ‘Timothy Fosu-Mensah tore his right anterior cruciate ligament yesterday and will be sidelined for the coming months.

‘Wishing you a strong recovery, @tfosumensah!’

The club’s sporting director Simon Rolfes added: ‘It’s a tough blow for Timothy. We will do all we can to support him and help him come back stronger from this difficult situation.’

Fosu-Mensah left Old Trafford in January in a bid to kick-start his career after failing to establish himself in Ole Gunnar Solskjaer’s Manchester United plans. 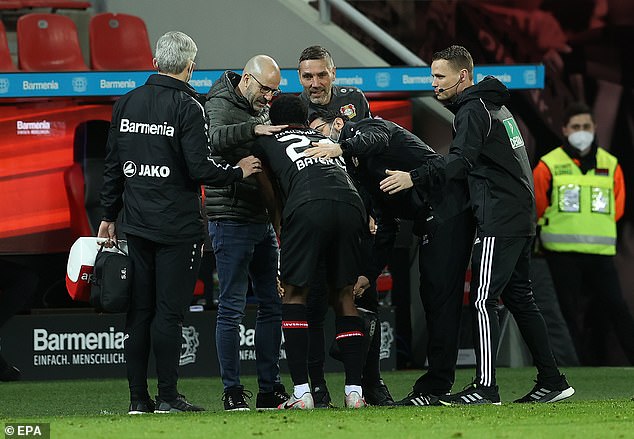 Speaking after his departure, he revealed he felt he had to leave for the sake of his career.

‘It was my decision. The manager was good to me but at the end I was not playing a lot,’ he said during his unveiling.

‘When you are 22, 23, 24-years-old you need to be playing. I didn’t play much and I wanted to. It was the best decision in the end to go somewhere else where I would get more minutes.’

It is the second serious knee injury Fosu-Mensah has suffered in his career to date. His spell on loan at Fulham was curtailed in April 2019 after sustaining knee ligament damage in a match with Everton.