Ukrainian tennis star Dayana Yastremska has said she is ‘astonished’ after receiving a provisional ban for a banned substance and has claimed the result ‘is consistent with some form of contamination event’.

The 20-year-old tested positive for mesterolone metabolite, an anabolic agent, on November 24 after providing a urine sample and she was informed of the outcome by the International Tennis Federation (ITF).

Yastremska was charged with an anti-doping violation on December 22, with the ban coming into force on January 7. She chose not to challenge the provisional suspension.

With no date announced for a hearing, her participation in next month’s Australian Open is now in serious doubt.

‘I firmly state that I have never used any performance enhancing drugs or any prohibited substances,’ she said on Twitter.

‘I am astonished and under shock, particularly given that two weeks prior to this test – on 9 November 2020 – I tested negative at the WTA event in Linz.

‘After this last tournament of the year, I stopped practising to rest prior to the start of the new season.

‘Only a very low concentration of mesterolone metabolite was detected in my urine. Given that low concentration and given my negative test two weeks earlier, I have received scientific advice that the result is consistent with some form of contamination event.

‘Besides, I have been informed that this substance is meant for use as medication by men and that women are not advised to use it due to the adverse effects it causes.’ 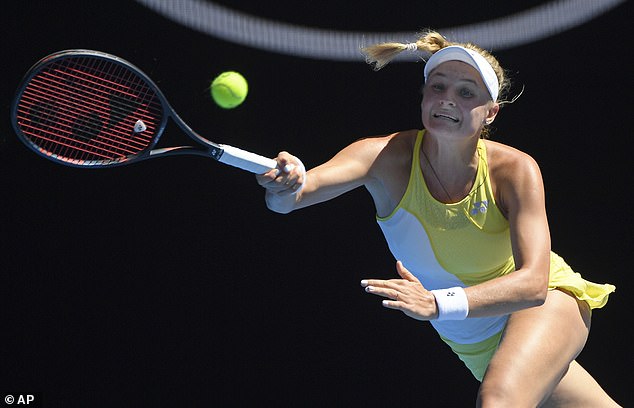 World No 29 Yastremska is one of the rising stars of the women’s game, reaching as high as No 21 in the world in January last year.

She reached the third round of the Australian Open in 2019, beating former top-10 players Sam Stosur and Carla Suarez Navarro before being defeated convincingly by Serena Williams.

The right-hander went one better later that year at Wimbledon, beating future Australian Open champion Sofia Kenin on route to the fourth round.

Yastremska has three WTA titles to her name, the last of which was won in Strasbourg in May 2019 when she beat Caroline Garcia in a thrilling three-set final.