Lewis Hamilton has made a dramatic return to action following his coronavirus ordeal by taking part in practice ahead of the Abu Dhabi Grand Prix.

The Mercedes driver was give the all clear amid much secrecy by local authorities following his lay-off.

And he arrived on track, accompanied by treasured bulldog Roscoe, wearing an eye-catching black and white outfit, bucket hat and face mask. 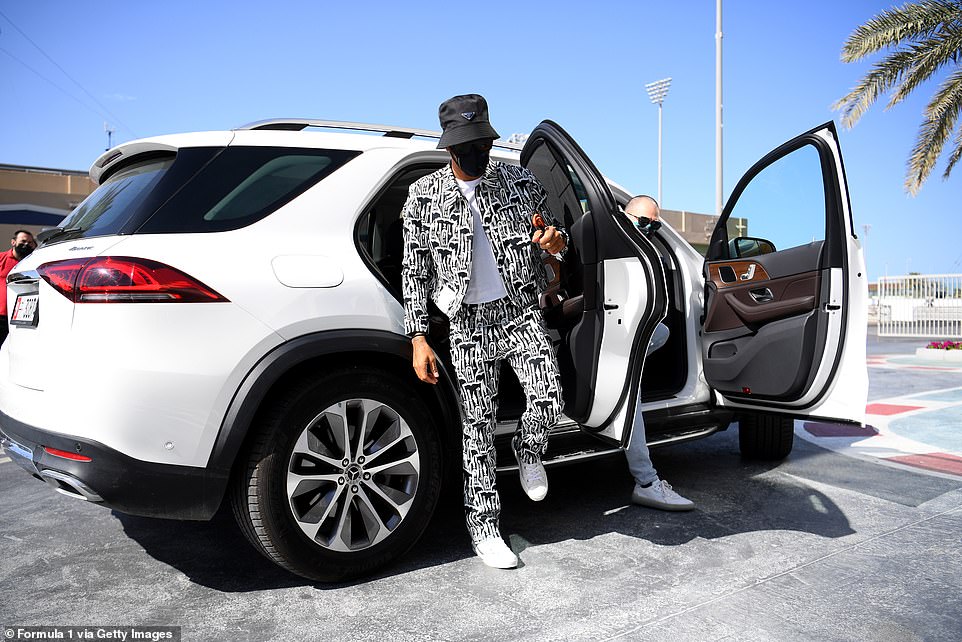 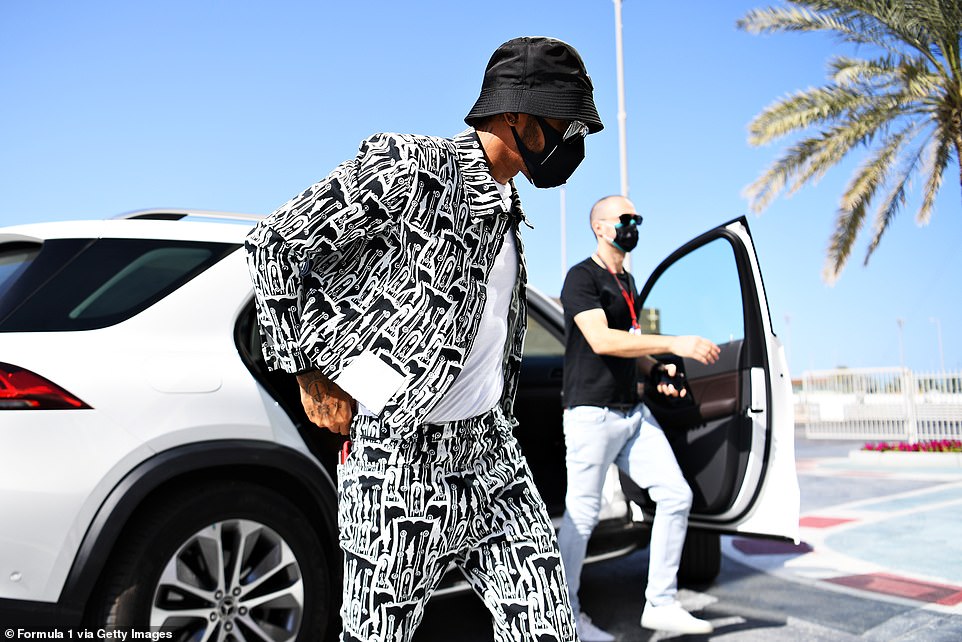 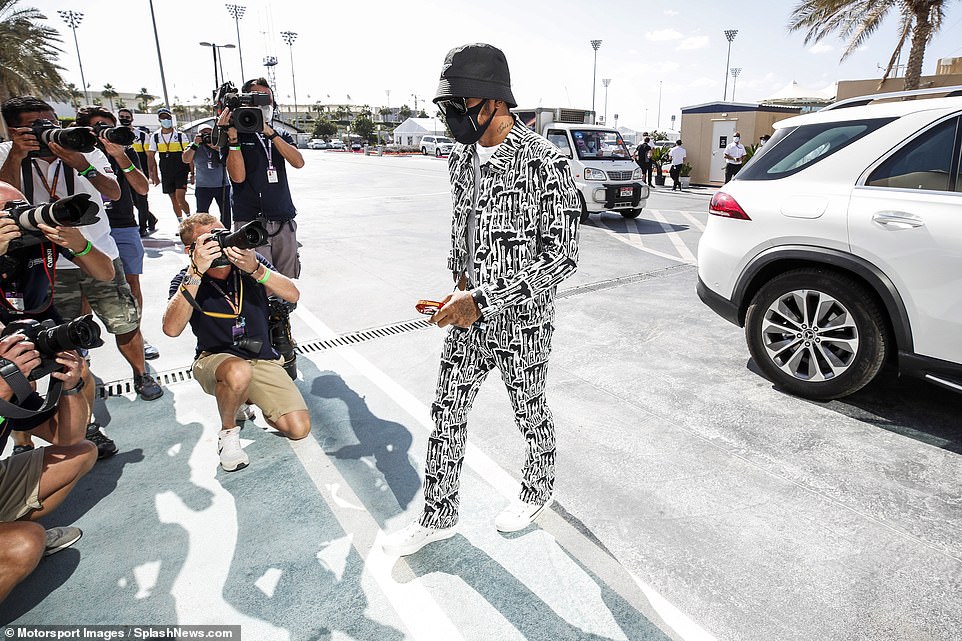 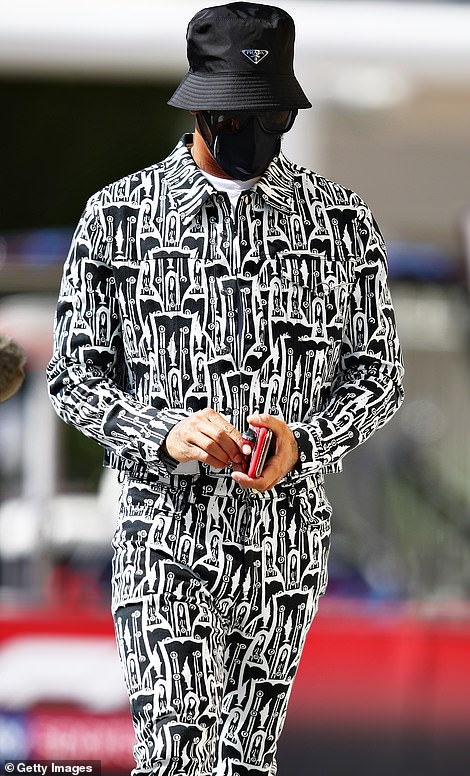 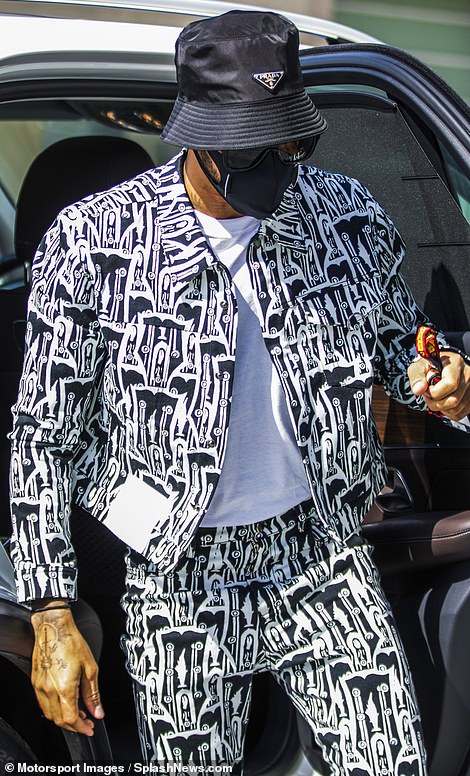 He appeared to be supporting black designer Kerby Jean-Raymond in wearing the stylish look. The jacket alone costs around £440 ($575), while his Prada bucket hat costs an eye-watering £220.

Shortly after his arrival, the seven-time world champion was back in the cockpit and getting a feel for the circuit ahead of the final race of the season.

He was absent for the Sakhir Grand Prix in Bahrain – the first race he has missed since his Formula One debut in 2007.

Mercedes, knowing the depth of his desire, promised to give him until the last moment to prove his fitness. 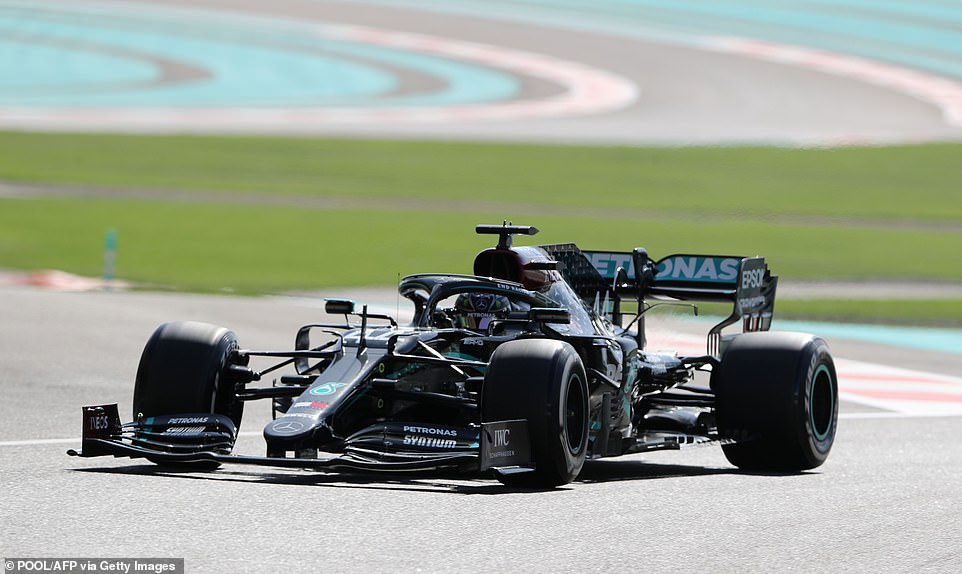 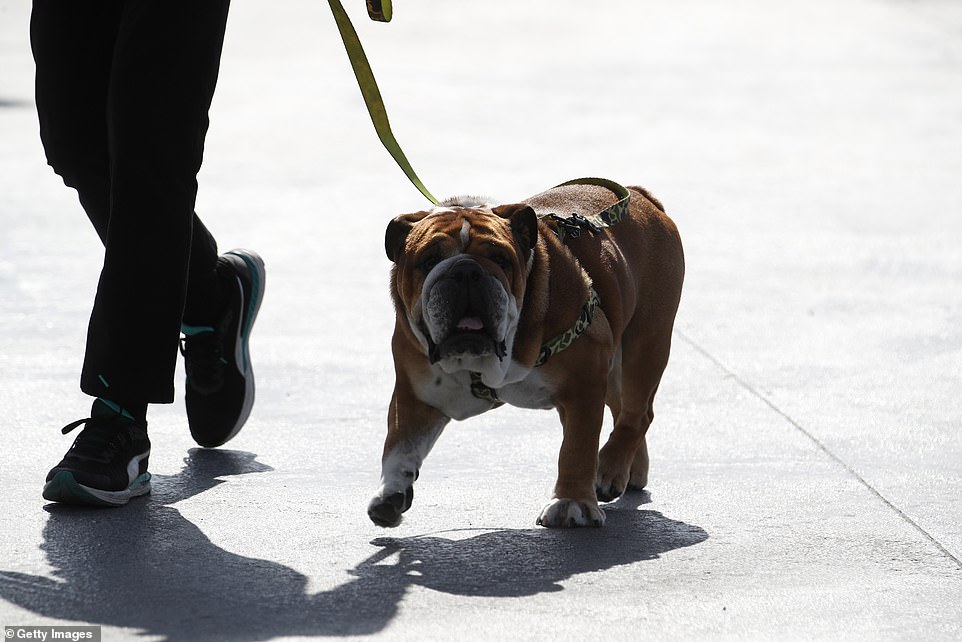 Hamilton served his 10-day quarantine in Bahrain. The FIA have confirmed that he tested negative for Covid, a prerequisite for entering Abu Dhabi.

All the F1 community is stationed on Yas Island close to the track after being subjected to swabbing on arrival at the airport.

Although most of the 1,200-strong group arrived in a sequence of charter flights on Monday, Hamilton was allowed special dispensation to touch down on Thursday.

That is bad news for George Russell, his fellow Englishman, who stepped into the breach a week ago and nearly won the race only to be hit by a pit-stop blunder and then a puncture.

‘The Mercedes-AMG Petronas F1 Team is pleased to confirm that Lewis Hamilton will drive for the team in this weekend’s Abu Dhabi Grand Prix,’ the world champions said in a statement late on Thursday evening.

‘Lewis tested negative for Covid-19 on Wednesday prior to completion of his self-isolation period in Bahrain. This enabled him to travel to Abu Dhabi on Thursday afternoon, and he tested negative on arrival.

‘Lewis has therefore completed the protocols required by the FIA for his entry to the paddock and will be able to take part in the race weekend. ‘George Russell will return to Williams Racing for the final event of the 2020 season.’ 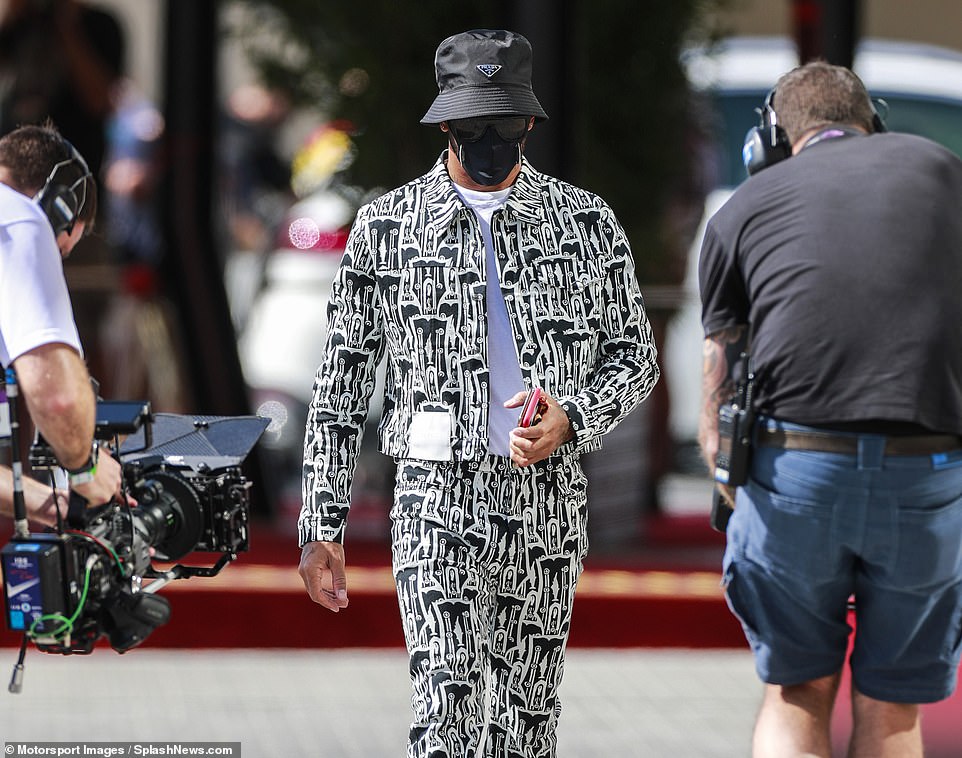 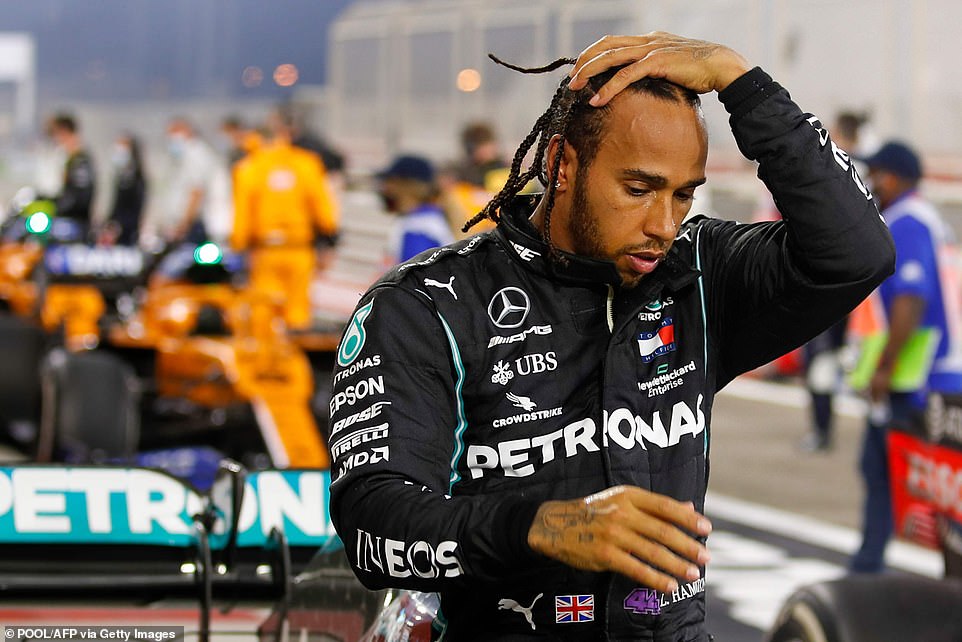 There is no doubting Lewis Hamilton’s talent on the track – but his outlandish outfit choices are far more divisive.

The seven-time world champion, 35, today made headlines with the garish white and black jacket and matching trousers he wore ahead of practice for the Dubai Grand Prix – a look he finished off with a £220 bucket hat from Prada.

It is the latest in a string of dizzying outfits the racing ace has worn since the start of the year.

From a Dior newspaper print suit to a £510 Prada shirt, Hamilton’s wardrobe is not short of designer labels. He has also demonstrated a love of matchy-matchy looks, most notably stepping out in head-to-toe check in a garish green and pink colourway while in Italy this summer.

Then there are the slogan jumpers, baggy tracksuit bottoms and an extraordinary number of trainers. Here, a look at some of his boldest looks of 2020. 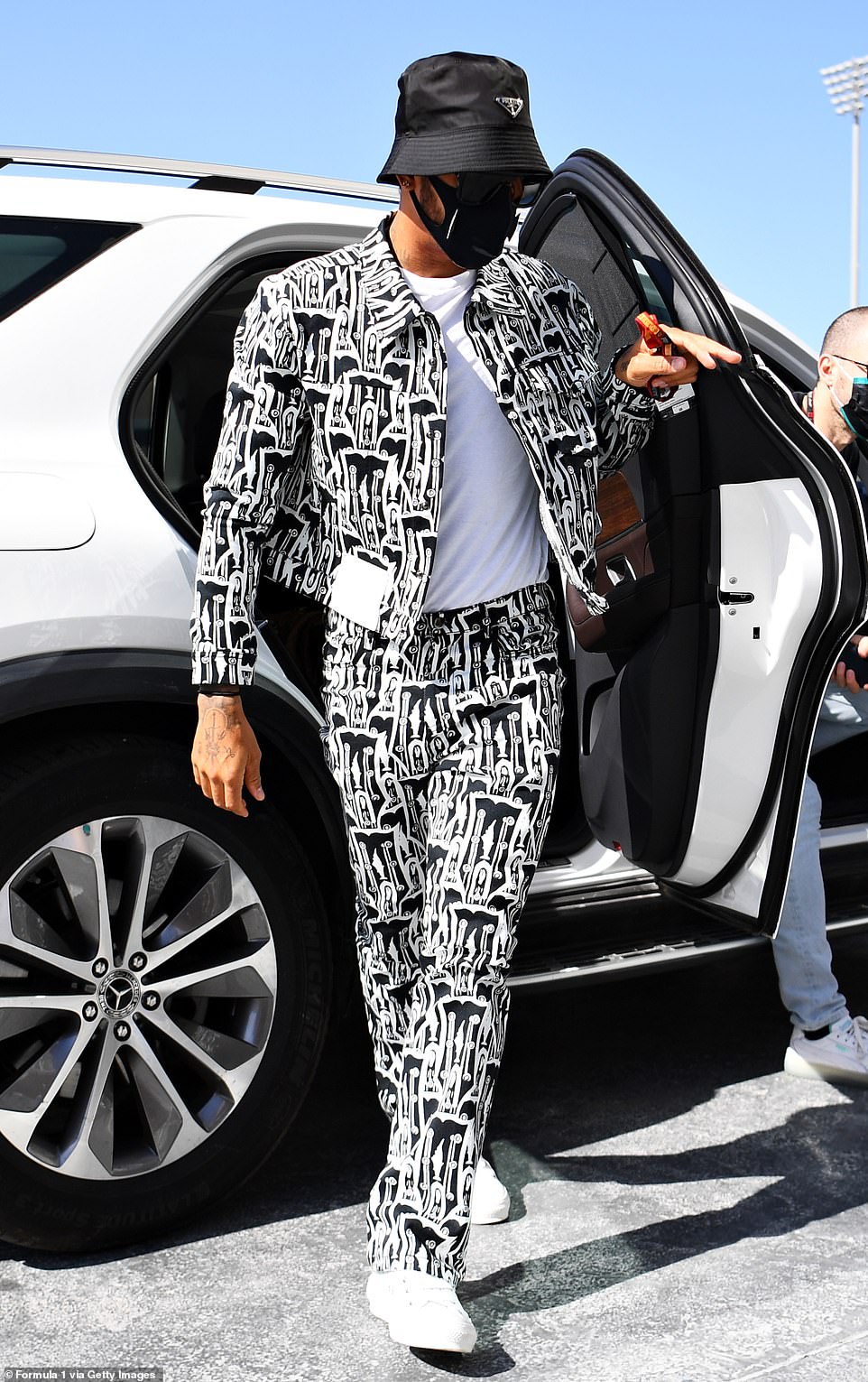 Lewis Hamilton today made a dramatic return to action following his coronavirus ordeal by arriving for practice ahead of the Abu Dhabi Grand Prix in an eye-catching black and white outfit that’s been compared to the chequered flag. A lover of labels, the 35-year-old finished the look with a £220 Prada bucket hat. 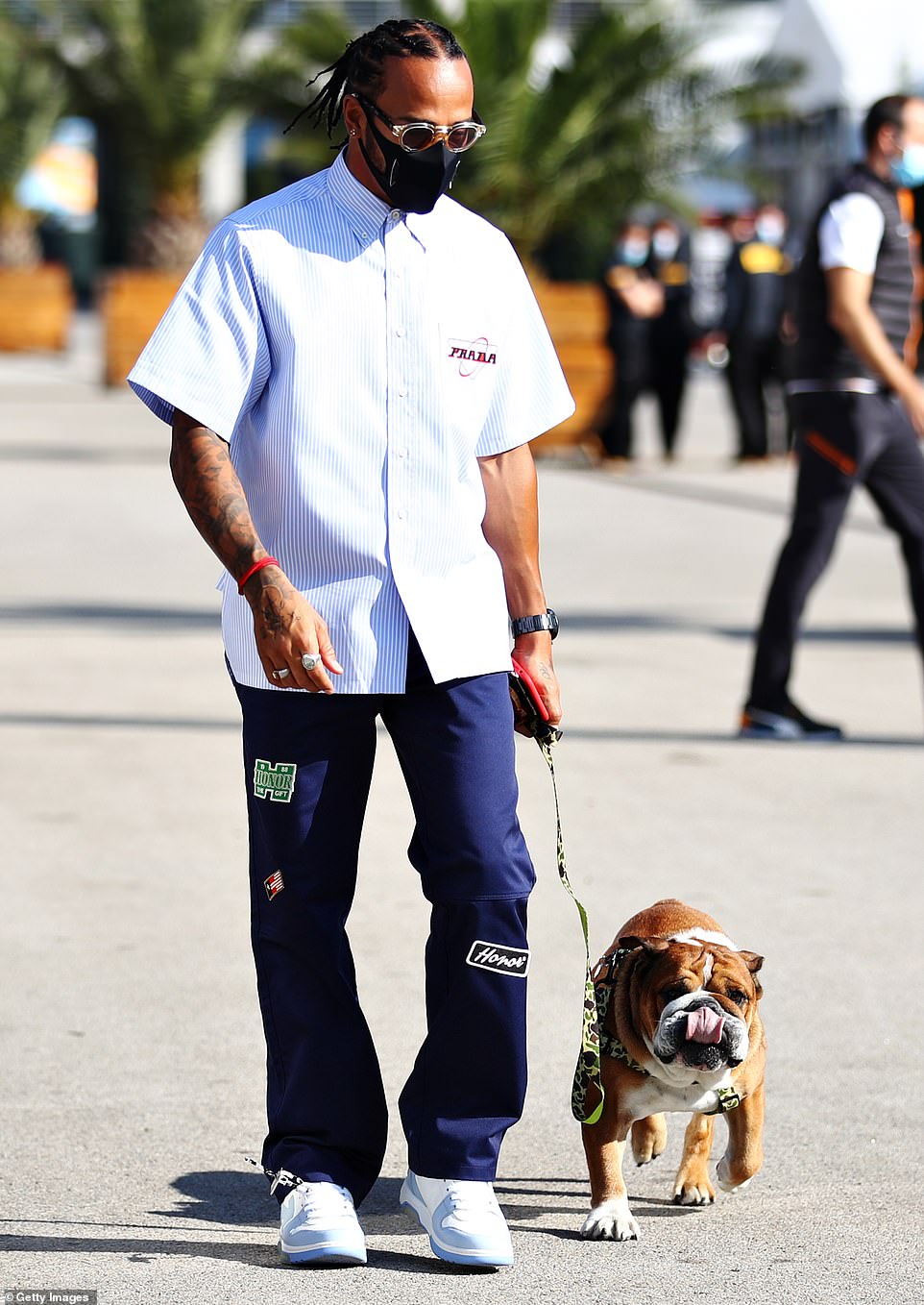 More designer labels were on display when Hamilton stepped out in a £510 pinstripe Prada shirt and £140 cargo pants to walk his dog Roscoe ahead of the Turkey Grand Prix. Both the shirt and trousers featured retro patches. The outfit was finished with a pair of trainers 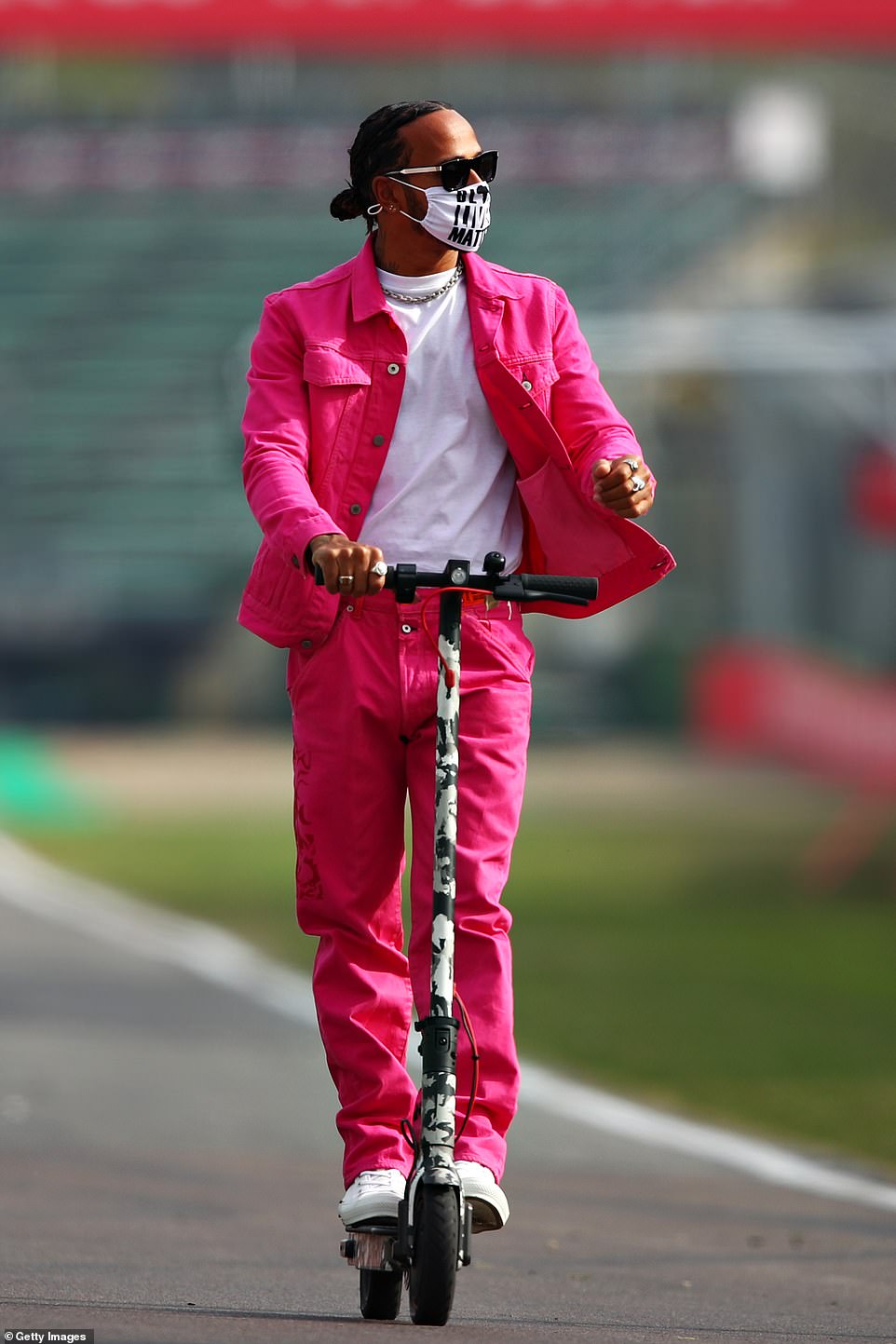 Vibrant even by his standards, Hamilton was unmissable in the garish pink jacket and matching jeans he wore for a lap of Italy’s Autodromo Enzo e Dino Ferrari race track on his e-scooter. The sportsman added a touch of conventionality to his colourful look by wearing a simple white T-shirt and matching white trainers.

READ ALL ABOUT IT 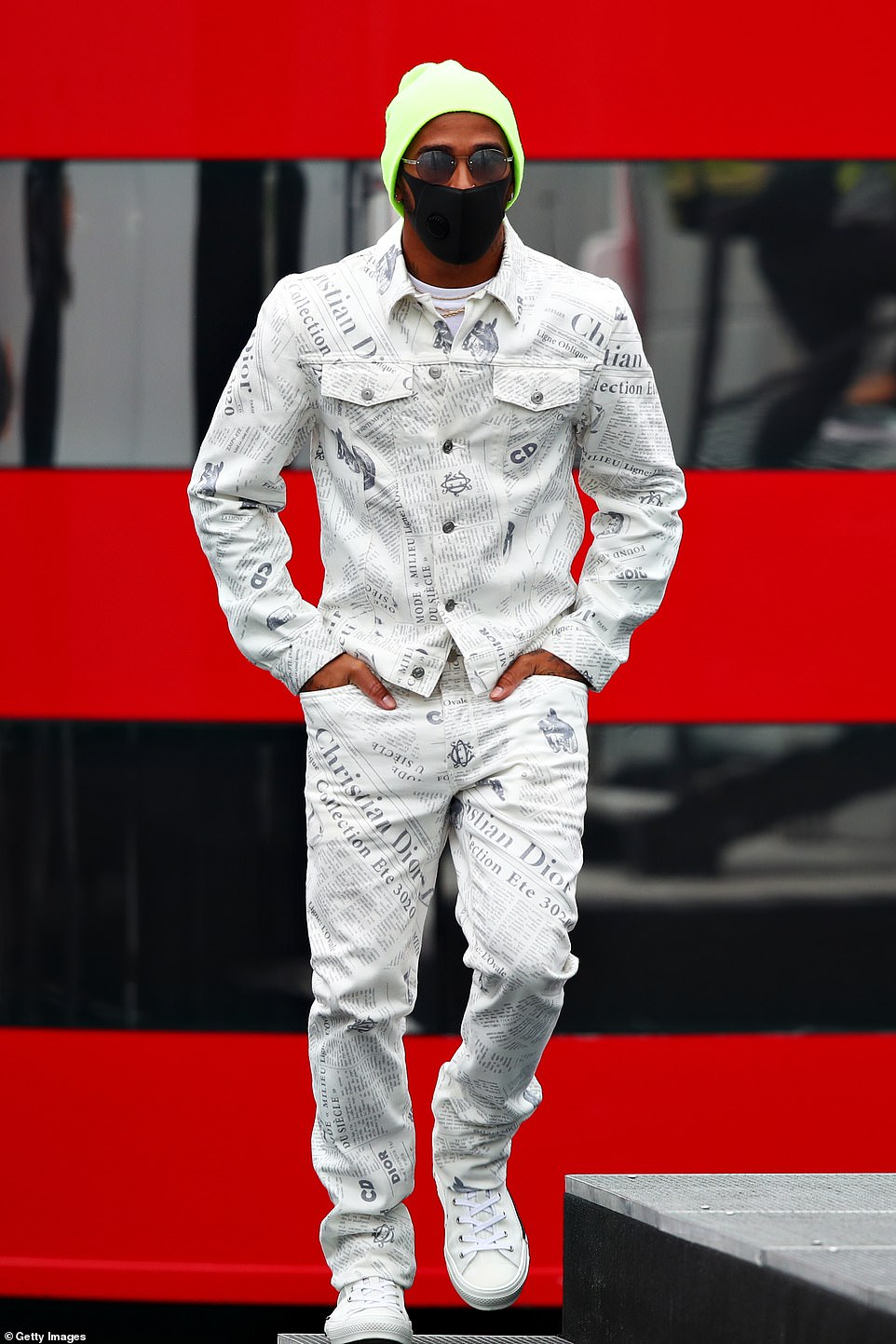 Hamilton donned a newspaper-print co-ord, comprising of a denim shirt and straight-leg jeans, from French fashion house Dior as he strolled through the paddock ahead of the the F1 Eifel Grand Prix at Nuerburgring. He finished the outfit with a fluorescent green beanie 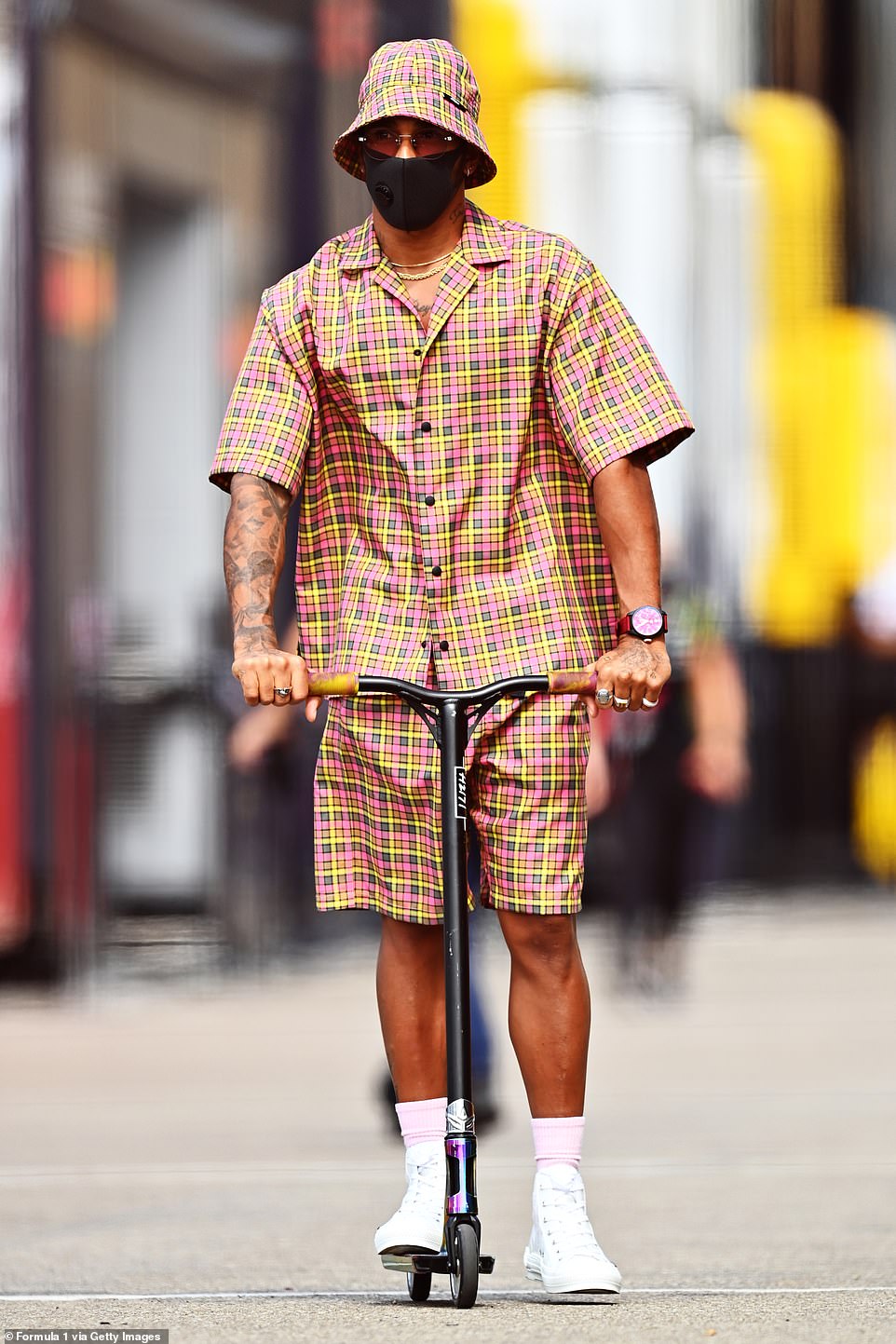 Demonstrating his love of head-to-toe matching looks, Hamilton was spotted scooting around the paddock ahead of the Tuscany Grand Prix in a pink, yellow and green check shirt, worn with co-ordinating shorts and bucket hat. Hamilton accessorised his outlandish look with a gold chain necklaces and shades, along with baby pink socks and a watch with a pink face 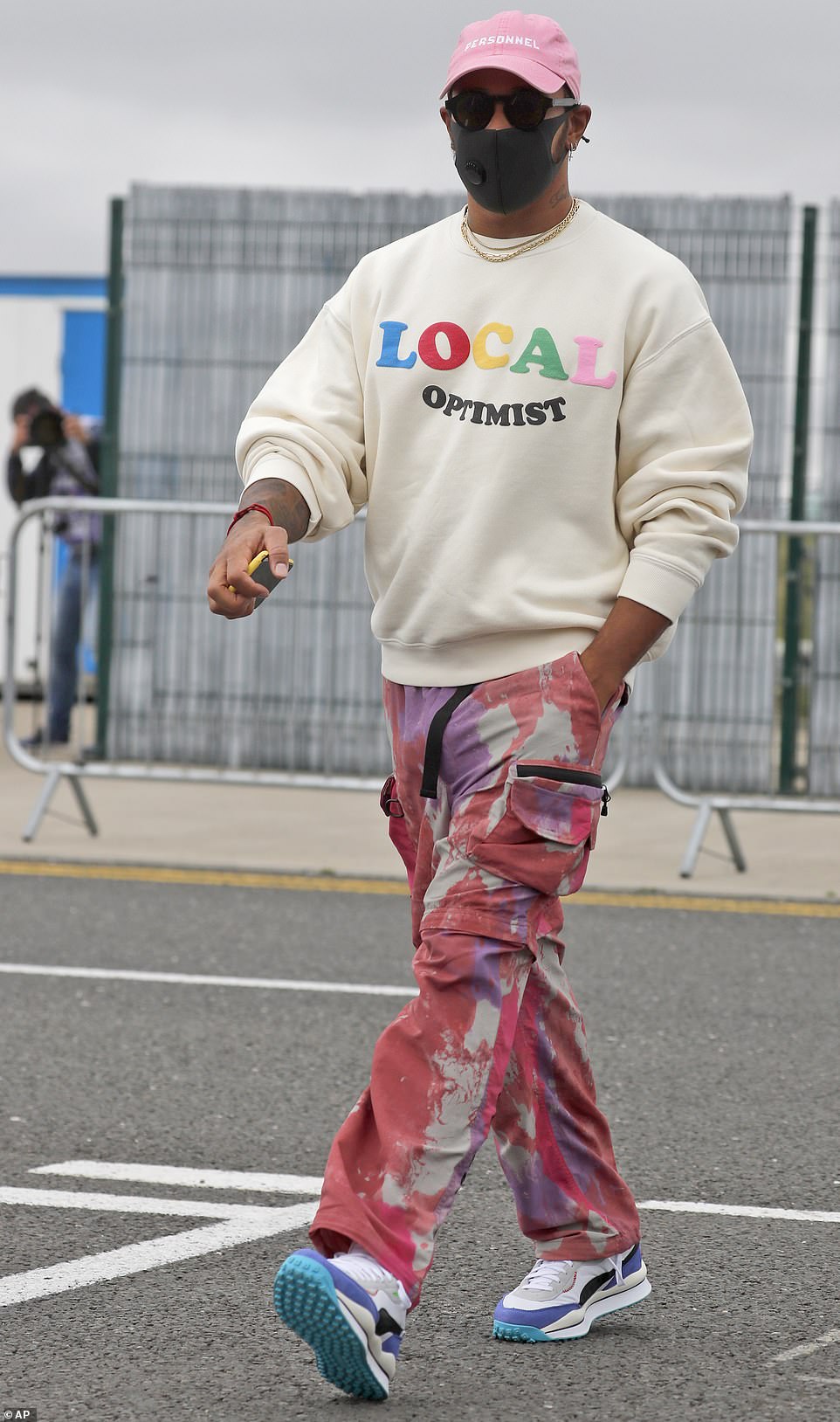 There was lots going on with Hamilton’s outfit as he arrived for the 70th Anniversary Formula One Grand Prix at Silverstone. The F1 driver wore paint-splatter purple, grey and red cargo pants with a ‘local optimist’ slogan jumper and a ‘personnel’ slogan cap 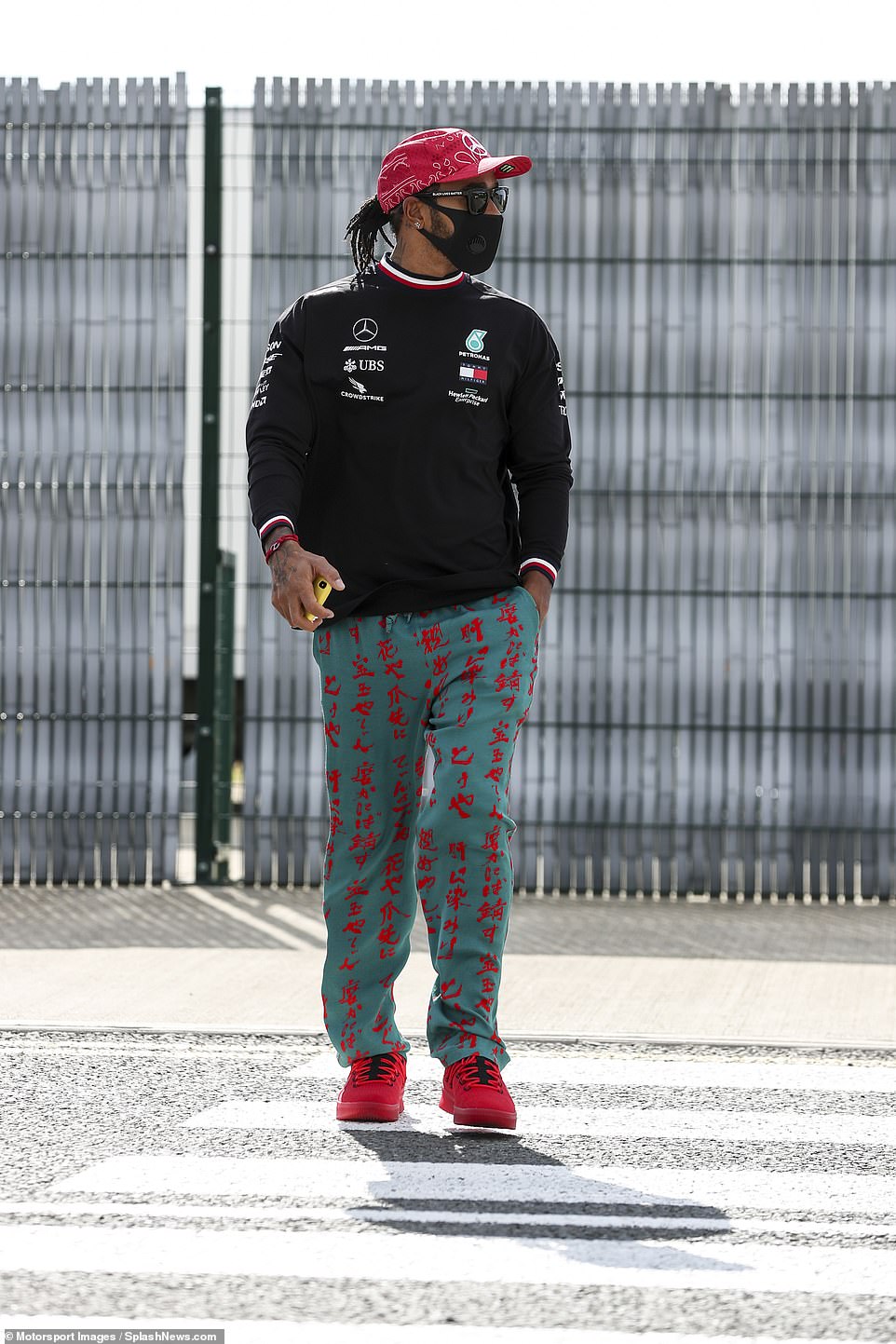 Teaming his Mercedes team top with a pair of turquoise and red tracksuit bottoms, Hamilton made yet another bold fashion statement at Silverstone this summer. Sticking to co-ordinated accessories, the F1 driver swapped his favourite white trainers for a scarlet pair 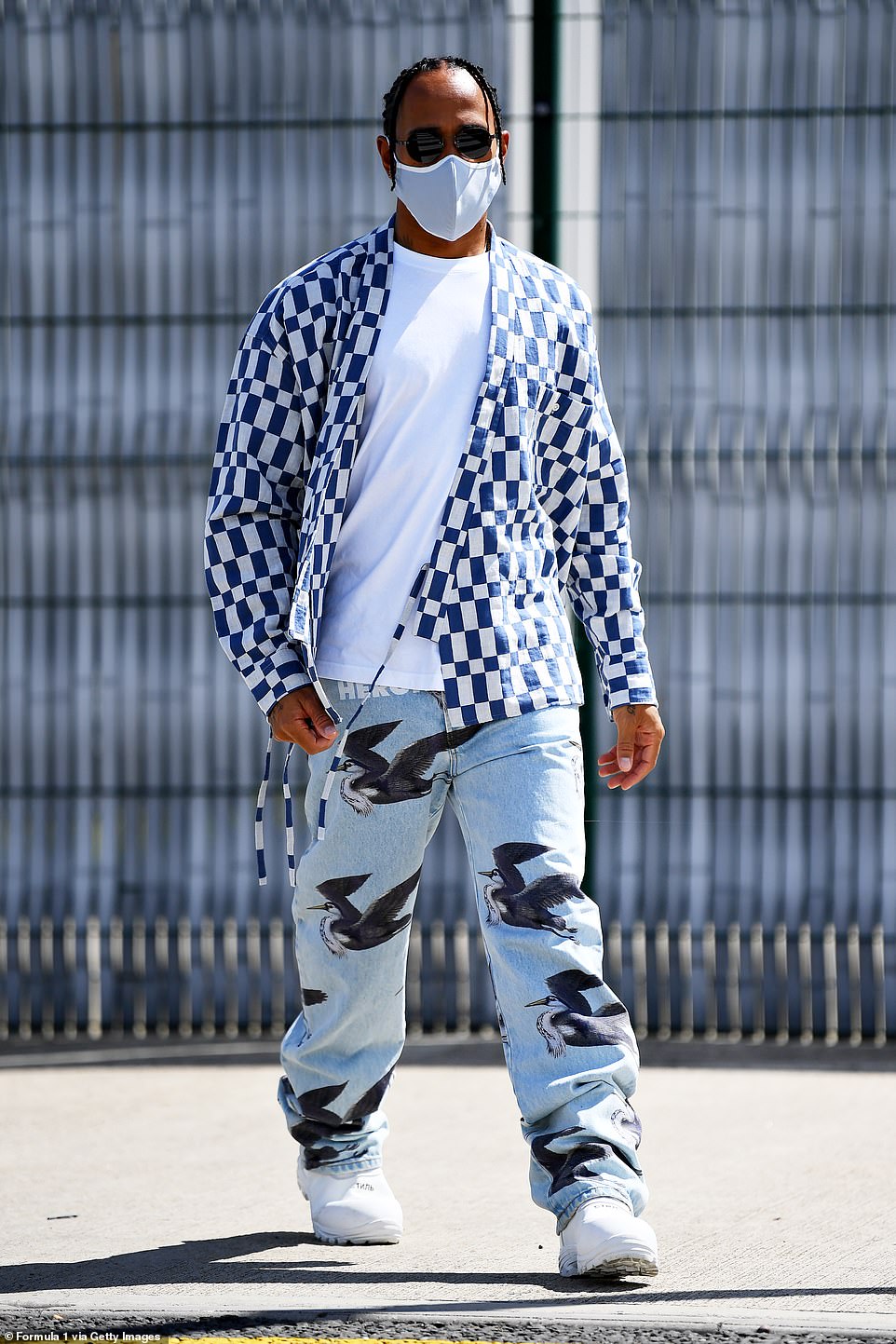 Never afraid to test the boundaries with prints, Hamilton wore a blue and white checkerboard shirt and oversized white t-shirt with a pair of £620 Heron Preston jeans. Staying true to his wardrobe staples, Hamilton finished the look with a pair of chunky white trainers

GIVE HIM A HAND!

Mismatched even by his standards, Hamilton experimented by pairing a baggy jumper with a flaming hand design with a pair of ornately decorated jeans ahead of the Hungarian Grand Prix 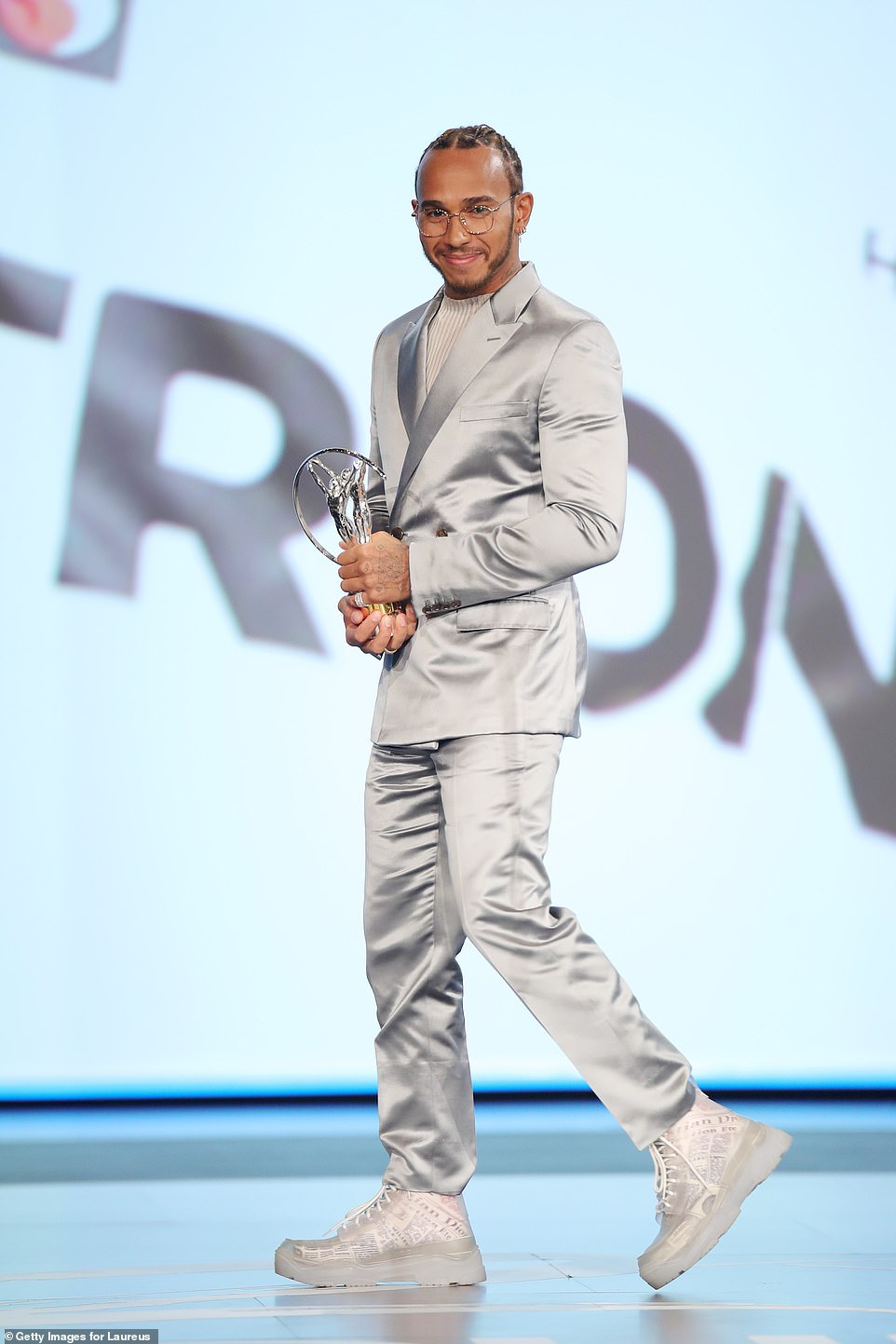 Even a traditional suit is given a twist at Hamilton’s hands, with the racing ace choosing a metallic silver style for the 2020 Laureus World Sports Awards. The fashion maverick eschewed a traditional suit in favour of a knitted top and added trainers by Dior