Real Sociedad joined Napoli in the last 32 of the Europa League after snatching a 1-1 draw against the Italians in a dramatic final round of group games on Thursday.

The two sides were in a three-way battle with Dutch side AZ Alkmaar for the two qualification spots from Group F.

Heading into the final minutes, the places looked to be going to Napoli and Alkmaar.

The Italian side led at the newly renamed Diego Armando Maradona Stadium following Piotr Zielinski’s 35th-minute strike and Alkmaar, despite being reduced to 10 men, were drawing 1-1 at Rijeka.

But the picture changed suddenly as Willian Jose grabbed a stoppage-time equaliser for LaLiga high-flyers Sociedad.

Even that would not have been enough for the Spaniards had Alkmaar held on in Croatia but the late dismissal of Jesper Karlsson ultimately proved costly. Ivan Tomecak killed off the hopes of the Dutch with a stoppage-time winner for the bottom side.

There was also an extraordinary finish in Group A as 10-man Young Boys claimed the remaining qualification spot available with a remarkable 2-1 victory over nine-man Cluj.

Jean-Pierre Nsame and Gianluca Gaudino both struck in stoppage time as Young Boys came from behind to beat the Romanians, who had only gone ahead themselves in the 84th minute through Gabriel Debeljuh.

Nasame’s equaliser came from the penalty spot after Cluj goalkeeper Cristian Balgradean was sent off. Nasame was then dismissed himself moments later before Gaudino grabbed the winner and Damjan Djokovic became the third player to receive a red card. 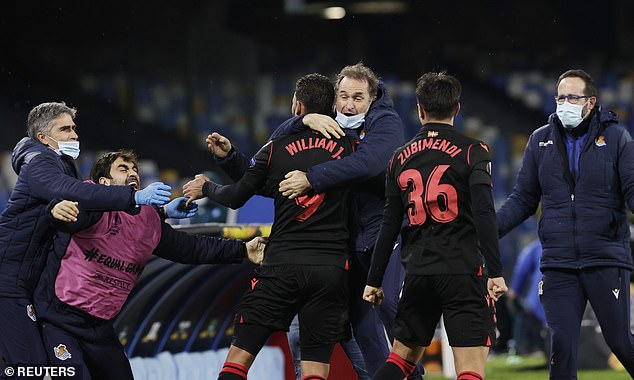 Roma, who had an unassailable lead at the top of the group, were beaten 3-1 in their dead rubber against CSKA Sofia.

Feyenoord lost their straight shoot-out with Wolfsberg 1-0 to miss out on a place in the knockout stages.

Dejan Joveljic scored the only goal as the Austrian side took the runners-up spot in Group K behind Dinamo Zagreb, who beat CSKA Moscow 3-1.

There was a similar situation in Group I, where Maccabi Tel Aviv beat Sivasspor 1-0 to finish second to Villarreal. Enric Saborit scored the Israeli side’s winner. Villarreal’s final match against Qarabag is yet to be played having been postponed earlier in the week.

Norwegian side Molde went through after drawing 2-2 in their decisive final game with Rapid Vienna in Group B.

Magnus Wolff Eikrem scored both for Molde as they took the runners-up spot in the group behind Arsenal. Marcel Ritzmaier and Melih Ibrahimoglu scored equalisers for the hosts in the Austrian capital but it was not enough as Vienna finished third.

Group winners Arsenal maintained their 100 per cent record as they rounded off their round-robin fixtures with a 4-2 victory over Irish side Dundalk, who finished without a single point.

The identities of qualifiers from the other seven groups were already known, with only final placings to be determined. 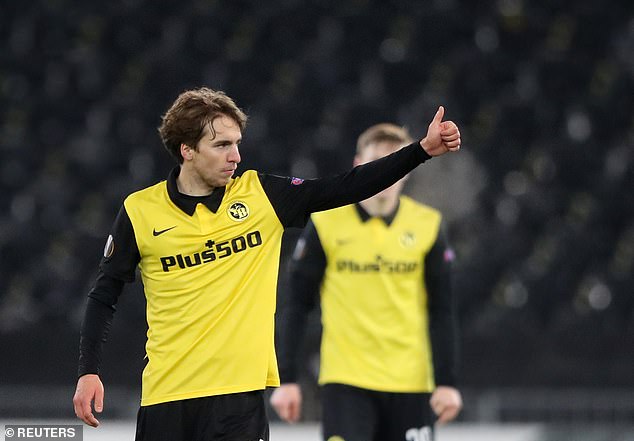 Scottish Premiership leaders Rangers ensured they would go through as winners of Group D as they claimed a 2-0 win away at Lech Poznan with goals from Cedric Itten and Ianis Hagi. Benfica had to settle for second after a 2-2 draw at Standard Liege.

Tottenham beat Antwerp 2-0 with goals from Carlos Vinicius and Giovani Lo Celso to pip the Belgians to top spot in Group J. LASK won 3-1 at Ludogorets in the group’s other game to leave the Hungarians without a point.

Leicester won Group G after a 2-0 victory over AEK Athens. Cengiz Under and Harvey Barnes scored their goals early on, while Braga ended up finishing second despite a 2-0 win over Zorya Luhansk.

Bayer Leverkusen beat Slavia Prague 4-0 to take top spot in Group C ahead of the Czechs while PSV Eindhoven claimed first place in the Group E with a 4-0 win over Omonia. Granada were left as group runners-up after a goalless draw at PAOK.

Ryan Garcia On Pacquiao Fight Falling Through: â€œHe Can Do Whatever...